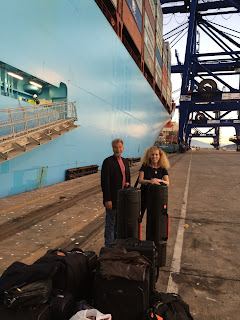 I wake up at 3:20 a.m. and I don’t remember where I am. It’s pitch dark and I hear a steady hum somewhere far below my room. As I reach for my iPhone, it comes back to me: I’m in a ten-by-twelve foot cabin on the F Deck of the Mærsk Mc-Kinney Møller, the largest container ship in the world. We’re at dock.

There’s no telephone, no television, and no wifi, only an orange glow visible through the window. It’s night one of a four-night voyage from Algeciras, Spain to Rotterdam, and our video crew is onboard to get a behind-the-scenes look at the operations of this mammoth ship.
We’re filming for the second hour of our two-part program about Adam Smith, the 18th-century Scottish economist and author of The Wealth of Nations and The Theory of Moral Sentiments.

In the first hour we profile Smith’s life, following his footsteps from his birthplace in Kirkcaldy, Scotland, around Europe and back to Edinburgh, to discover how he developed his groundbreaking ideas. In the second hour, we go inside four well-known companies through which we can demonstrate his ideas in action today. Mærsk Line, the world’s largest overseas cargo carrier, represents global trade, which Smith predicted would result in increased prosperity for all its participants. 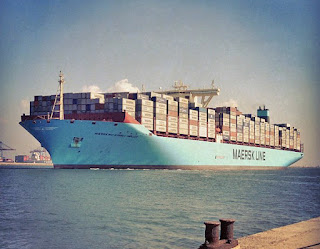 The Mærsk Mc-Kinney Møller is the first of Mærsk Line’s Triple E container ships, and has the largest capacity of any ship at sea. It measures 400 meters in length (the Eiffel Tower is 324 meters long) and carries more than 18,000 containers, filled with everything from computer parts to bananas. The containers are stacked 18 tall with fewer than 50 percent of them visible above the deck when the ship is loaded.
We have been invited to join the ship for four days near the end of its route from Asia to Europe. On a beautiful October evening, we board. The ship docks in southern Spain for a few hours to unload cargo at the huge port facility in Algeciras. It had started in Shanghai 20 days earlier. We bring everything to the dock, where a large rope bag is lowered down to us by a tall crane; we stuff it full of our seven equipment cases and three small suitcases. Hoisting our backpacks and computer bags on our shoulders, the three of us carefully climb up several levels to meet our equipment on the main deck. 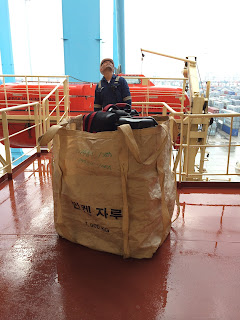 The crew accommodations are located in the tower, about a third of the way back from the bow of the ship. That tower stands seven or eight stories above deck and contains the large bridge (where all the controls and electronics are), cabins for the 22 crew, a large galley, two small dining rooms, common rooms, a small library and a few offices. There’s an elevator within the tower but I find that when the ship is at sea and rocking, the elevator lurches back and forth and it is more comfortable to climb the stairs.

Soon after we board, we are given a safety briefing by Per Shilling, the chief engineer. We receive an introduction to the layout of the ship, the location and use of lifeboats and life preservers, complete with a strict warning not to fall overboard.
Afterwards, we meet in the small officer’s dining room for dinner. We sit at a table with the captain, the chief engineer and a couple of other men who work with the captain on the bridge. We are warned to be prompt for the three meals each day because that’s when and where the men gather to discuss the day’s work. During their shifts, they’re far apart from each other as they tend to their tasks around the ship.
The captain of this giant blue vessel, Jes Meinertz, is a Dane whose entire career has been spent with Mærsk. He works for 12 weeks in a row and then has 12 weeks off and claims he loves it. He runs the Mærsk Mc-Kinney Møller from Asia to Europe and back again. The boat never docks in the US because there is no US facility large enough to accommodate the ship. He was very friendly and welcomed us to explore and shoot wherever we want to. We tell him that we will interview him and other crew members to learn about their jobs and what challenges they face.
We spend the night in simple but very functional cabins equipped with a bed, desk and bathroom. That first morning we rise well before dawn and set up our equipment on the bridge to watch the moon set and the sun rise as we sail out of Algeciras and through the Straits of Gibraltar, headed back out to sea. What a beautiful sight. 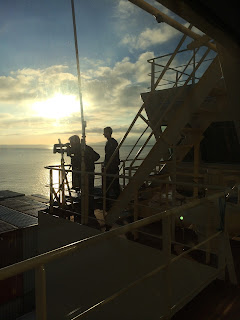 Over the next days we will shoot the ship from bow to stern, from the top of the bridge to the depths of the bilge. We will go deep into the engine room and film the two massive engines, which stand three stories tall and operate so efficiently that they move cargo at a fraction of the cost of trucks or railroad.
We will follow crew members as they tighten the braces which secure the containers and learn about the increasing number of containers that are equipped with climate control and plugged into the ship’s power. We will even follow the cook as he prepares meals, with the unique challenge of pleasing the palates of a multi-ethnic crew. It will prove to be a fascinating week and when we dock in Rotterdam we will disembark with more than enough footage to tell our story. Adam Smith probably wouldn’t be surprised that, as he predicted, global trade has propelled unprecedented numbers of people out of poverty, but he might be shocked by the immense scale of the ships which carry that trade.